The Differences Between Natural Quartzite and Engineered Quartz 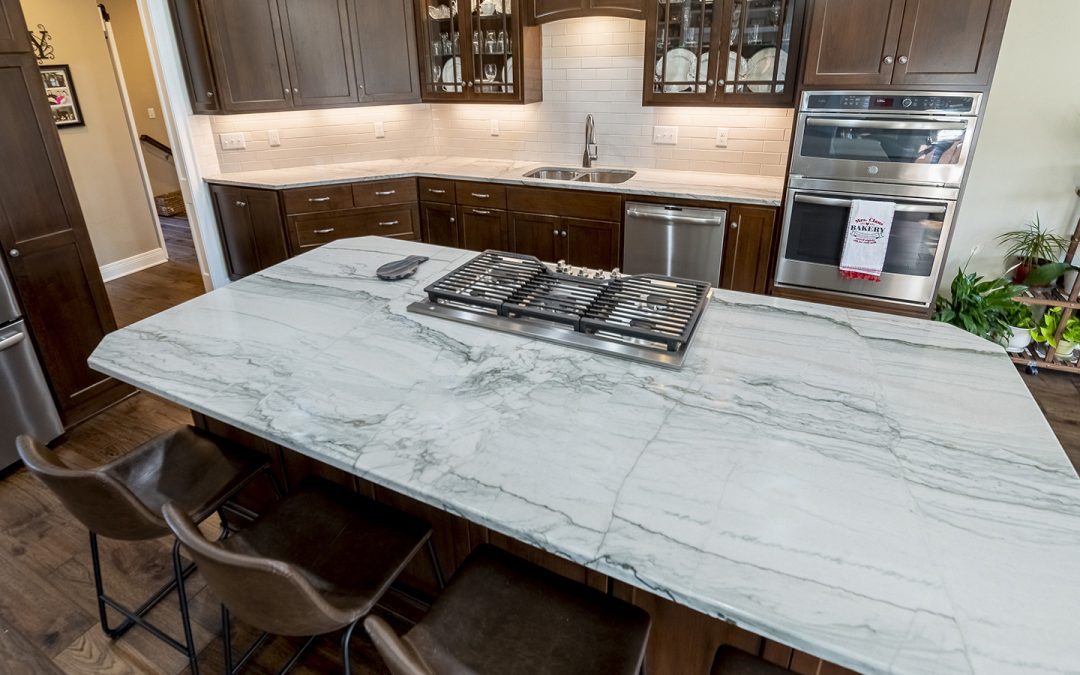 Engineered quartz and natural quartzite are both popular choices for countertops, backsplashes, bathrooms, and more. Their names are similar, and are sometimes (incorrectly) used interchangeably. But even aside from the names, there’s a lot of confusion about these materials. A recent article titled “Natural Quartzite and Engineered Quartz: What’s the Difference?” by Karin Kirk does a great job explaining the differences. Below are some excerpts from her article.

Quartzite is a natural stone.

Quartzite is 100% natural and comes directly from the earth. Quartzite has formed in locations all around the planet, but the most well-known quartzite quarries are in Brazil. Quartzite is also quarried in the United States, Sweden, Canada, Norway, India, and Italy, among other locales. Dramatic settings like the Medicine Bow Mountains in Wyoming show off quartzite in its natural habitat, where an impressive massif of white quartzite rises above the surrounding terrain.

Even though the name “quartz” refers to a natural mineral, engineered quartz (sometimes also called “engineered stone”) is a manufactured product. It’s made from quartz particles bonded together with resin, pigments, and other ingredients. Manufactured quartz is made in factories in the United States, Europe, and Asia, among other locations.

Natural quartzite contains minerals and nothing else.

All quartzites are made of 100% minerals and are purely a product of nature. Quartz (the mineral) is the main ingredient in all quartzites, and some types of quartzite contain smaller amounts of other minerals that give the stone color and character. Here are some examples of beautiful Quartzite StoneMark currently stocks in our stone yard inventory:

Quartzite can be used indoors and out.

Natural quartzite is at home in many applications, from countertops and flooring, to outdoor kitchens and cladding. Harsh weather and UV light won’t affect the stone. However, Quartz should be left indoors since the resins in engineered stone will turn yellow in the sunlight.

An unfortunate side effect of the desirability of quartzite is the temptation to sell stones as quartzite when they are not quartzite. Thus, quartzite is commonly mislabeled, which has resulted in widespread confusion about the properties of the stone. So-called “soft quartzite” is usually marble, which has entirely different properties than real quartzite. And, some sandstones are sold as quartzite, which further adds to the mix-up. Sandstone and quartzite have the same mineral ingredients (quartz), but quartzite has much lower porosity.

Engineered quartz is misunderstood, too.

The most common problem with quartzites is inadequate sealing – particularly along the edges and cut surfaces. As described above, some quartzites are porous, and care must be taken to seal the stone. As fabricator who is experienced with quartzite, we understand how to seal all types of quartzite, and StoneMark countertops receive a 15-year guarantee.

Engineered quartz should be protected from heat and not scrubbed too hard.

In a series of tests, major brands of engineered quartz stood up reasonably well to staining but were damaged by scrubbing with abrasive cleaners or scouring pads. Additionally, exposure to hot, dirty cookware damaged some types of quartz.

Which should you use?

There is no simple answer to this question. Each material has its devoted fans and selling points. If you choose quartz, make sure you purchase a quality product and buy from a reputable source. Regardless of which surface you choose, we can help you make an informed decision so the stone you select is perfect for your kitchen and lifestyle.